Three pieces of literature that taught us true things about love

And what it all comes down to is that love as an emotion is so powerful, every writer and his grandfather must use it in one way or another. From the star-crossed lover theme to unrequited love, poetry, drama and novels just plunk it in there. It was obviously easy to get it right at first (My love is like a red, red rose indeed). But as time passed, people changed. What’s more, facebook was invented and with it came relationship statuses. So literature started fucking it up. We got all manner of insipid pulp lit, supposedly about strong confident women, but with a love story at the heart of it. We got 50 shades of grey.

Wait, wait. This is not another one of my superior rants. I’m actually going to talk about books that got it right. There are several but only three have impacted my life and my perception of relationships that hold a romantic tenor.

The scene where lady Macbeth goes all “Be a man!” “From this time/ Such I account thy love.” OUCH. From Macbeth. Don’t even deny it. Sometimes in a relationship, the girl gets the guy to do stuff he wouldn’t do normally, by hinting delicately that he might not be man enough to rise to the occasion. It might not be as dramatic as murder, like it was over at casa Macbeth. But still, “Oh. Okay. I don’t know. Whichever guys I know think nothing of killing lizards. It’s sport to them.” Check. And mate. 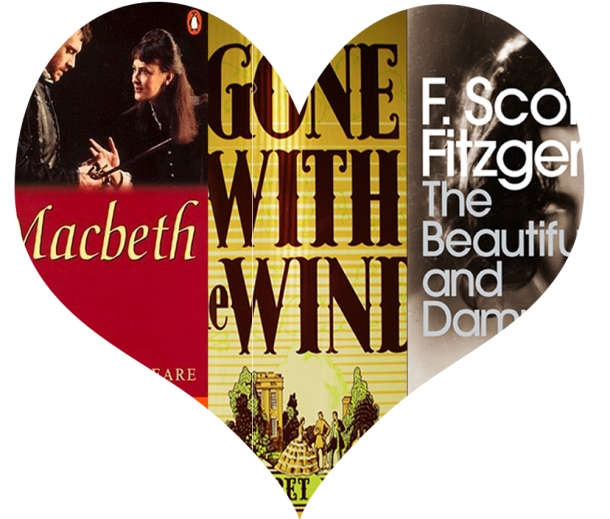 Gloria and Anthony Patch from The Beautiful and the Damned. When insecure meets insecure, there can be no awesome. Write that down and put it up on the fridge. In my experience, the more insecure you are, the more you’ll stress out about not appearing insecure. It’s only human nature. That’s why in relationships, two messed-up souls who seem to have it together only end in tragedy. This makes for great and poignant story lines. But off the page, its more hysterical weeping over vodka martinis, punching walls, threatening to throw the beloveds possessions into a river or taking penknives to mattresses to carve out names into the coir. I may or may not have seen all of this in real life. Living in women’s hostels can be pretty instructive.

Scarlet and Rhett from Gone with the Wind. There I go defying my hipster-ness by citing the most talked about love story of all time after Romeo and Juliet (I’ll never be that much of a sellout.). The Scarlet and Rhett angle to love is the most amazing, because the can’t-see-past-the-end-of-ones-nose philosophy (Props Mary Poppins) happens to one in every four people. “Oh my god. Eddie liked me, when I liked Joe. But I actually liked Eddie all along. Isn’t that the craziest”? Cosmic misdirection and misread signals are the hugest part of this ladka-ladki chakkar. And only one novel nailed it.

Posted in Tale of a fish and tagged books, F. Scott Fitzgerald, Gone with the wind, Macbeth, Margaret mitchell, The Beautiful and the damned, William Shakespeare. Bookmark the permalink.
%d bloggers like this: