My tumultuous relationship with 30 Rock

It was the morning of October 11th in 2006 when I watched the first episode of 30 Rock. It was love at first watch. Everything about the show and Tina Fey was fascinating to me. I loved the intelligent humour, the slapstick comedy, the completely idiotic dialogues and the ridiculous characters – Kenneth the page, Jenna the drama Queen, Grizz and DotCom; Tracy Jordan’s entourage and my personal favourite, Pete Hornberger. I watched, discussed, re-watched and re-discussed every episode excitedly. Jon Hamm’s hook hands; Oh my goodness, Julianne Moore with her Boston accent; Look, Aaron Sorkin doing the walk and talk… Was there anything this show could not do?

Well alas and alack, the sky was not the limit. Sometime at the end of season 4, I got bored. Other sitcoms came into my life and I started resenting 30 Rock. The jokes weren’t as funny any more, Liz Lemon’s life had crossed over to the pathetic zone, the plots became thinner and stupider, not in a this-is-so-silly-oops-I-did-a-spit-take stupid; just plain stupid. And after having twitched, read and talked about it incessantly for four whole years; I just gave up. I stopped watching it entirely. I questioned its funniness. Were the jokes my imagination or hilarious because it was a different time? I was lonely and sad, but I knew it was for the best. It wasn’t me, it really was them. 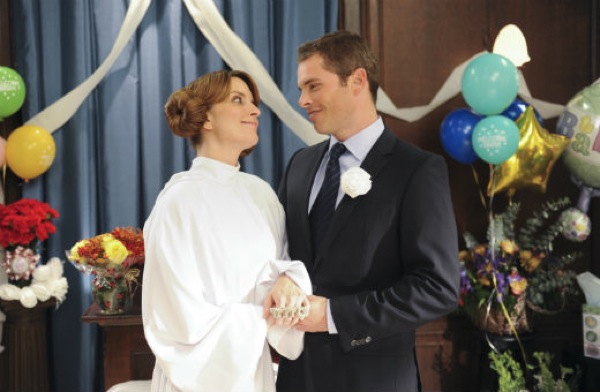 Then recently, I read online that they were nearing their finale and Liz was getting married to her boyfriend Chris Cross. Fond memories flooded back and when they took the form of sometimes Alec Baldwin, mostly James Marsden (who plays Chris) in my head, I knew I was in for it. Then two weeks ago, (it was fate I tell you) I was watching Comedy Central and a rerun came on. It was the one where Jack’s mentor dies and leaves him a pet peacock named Argus that tries to mate with Liz Lemon who is on a mission to uncover Jenna’s new boyfriend Paul’s dark secret. Kenneth and Liz manage to convince Jack that the peacock hold’s his mentor’s soul and Paul turns out to be a Jenna Maroney impersonator.

I laughed till there were tears in my eyes, especially at the bit were the peacock tries to mate with lemon’s mouth and the episode ends with two Jennas making out.

Hilarious.  What the hell, you only live once, I said to self, and decidedly downloaded all the episodes I hadn’t seen, starting from Season 5. It’s two weeks later and I am all caught up, right up to season 7 and it has been a rollercoaster. Liz Lemon’s wedding was so badass (Tina Fey’s daughter played a young Liz Lemon), Jack and his marriage to Avery Jessup was so twisted; it pulled me right back in. And I’m here again. Here meaning at that place, where I want to discuss every episode and talk about how funny Tracy Jordan is and how cute Chris is.

When the show finally does leave me, in an hour long special on January 13th, I know that, despite the fact that I almost gave up on it, it pulled through for me heroically. Now I know, I will always love 30 Rock. *sniff*

Posted in Tale of a fish and tagged 30 rock, Alec Baldwin, Tina Fey. Bookmark the permalink.
%d bloggers like this: